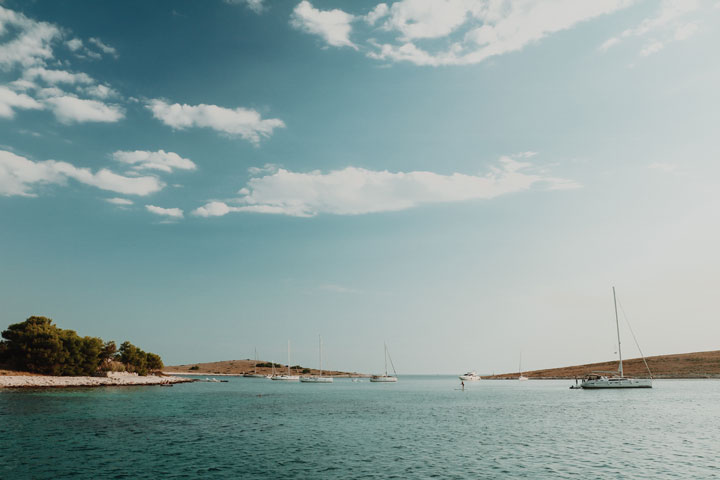 How can you enjoy sailing in the beautiful paradise of the Dalmatian coast ethically, in a green and friendly way? Globally, the oceans and seas are under threat due to human activities; marine life is being damaged and the coastline awash with litter. Even the relatively clean Adriatic sea has seen an increase in debris over the past few years. It is important to stem the tide by helping to reduce your impact on the environment. Sailors love pristine seas, here are some things you can do to keep enjoy sailing for years to come:

Sunscreen is a must on a boat, with the effect of UV doubled as it bounces off the surface of the sea, but make sure you choose wisely. Toxic chemicals found in normal sun creams are harmful to all marine life, including the Mediterranean mussel, corals and sea urchins.

With a  little bit of research, you can find brands that will give you guilt-free protection, such as Green People’s range. It goes without saying that you should apply your sun protection well before diving into the sea; it needs time to soak into the skin otherwise it will just wash straight off. Stick with creams and lotions rather than using sprays. When you apply a spray, a significant proportion ends up being taken by the wind, either into the sea or onto the deck. Both are bad for the environment, as it will ultimately end up in the sea when the skipper has to hose down the boat.

Rock the no-makeup look…. by actually wearing no make-up, rather than using products that make you look like you aren’t. Let’s face it, you are going to be spending most of your time dipping in and out of the sea so is there any point?

On the sea, try to keep all of your lotions and potions to a minimum, anything you put on will end up in the sea. This goes for your shampoo/conditioner, moisturizers and deodorant too. As well as Green People, brands such as Stream2Sea and Kind Natured have good ranges. Try using a crystal deodorant such as ‘Salt of the Earth’. Less is more, leave the hairspray at home! 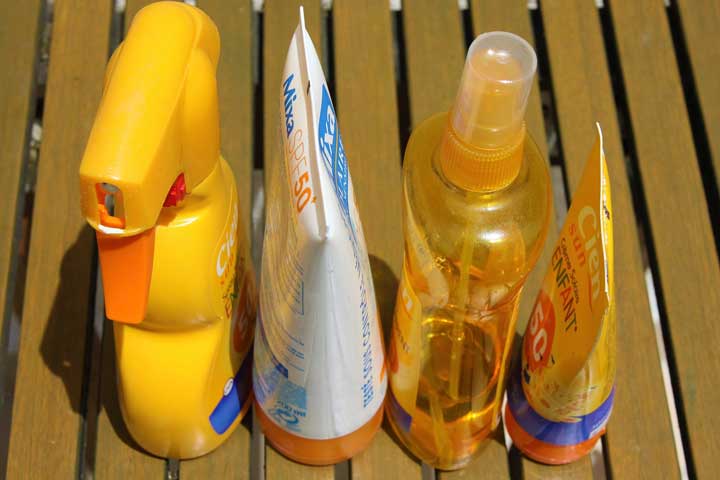 It is well publicized that there is a global plastics crisis and that the oceans are drowning in debris so make sure that you do not contribute to the problem. It can get windy on a yacht so stow litter below decks. Most harbors and marinas have recycling facilities so separate your rubbish accordingly. In 2016, Croatia produced 54,744 tonnes of plastic and less than half of this was recycled. There is a big push to improve this before the Adriatic goes the same way as other seas.

Although an absurd amount of smokers do not class cigarette butts as litter, they are actually the most common form of rubbish found in the sea and can take 10 years to decompose. The filters are made up of thousands of tiny plastic particles and as they slowly break-down, the micro-particles enter the marine ecosystem. If you really have to smoke, make sure you responsibly dispose of the evidence (and stay down-wind of other members of society who would rather not breathe your fumes!).

It is good to pick up litter and put it in the bin if you find it lying around. The same rule should apply in the sea: if you notice some rubbish in the water catch it and bin it.

Croatian tap water is some of the best there is, and it is perfectly safe to drink. The same definitely can’t be said of water from the yacht’s tank… on board, you need to drink bottled water. However, many of the harbors and marinas will allow you to refill your bottles so you can limit your plastic waste. When you are dining out, ask at the restaurant if they can serve you tap water, some will and some won’t.

Humans buy roughly one million plastic bottles every minute of every day. Try to limit the number you get, make sure you recycle them responsibly and reuse them if you can.

In the hot Croatian climate, food can turn quickly and yachts have limited refrigeration capabilities. Shopping little and often at towns you visit en route can be a pleasure, and help to reduce food waste. Pick up fresh fruit and vegetables from local markets, where the produce has been grown in the surrounding fields and gardens. This is brilliant for the environment as well as the local economy. 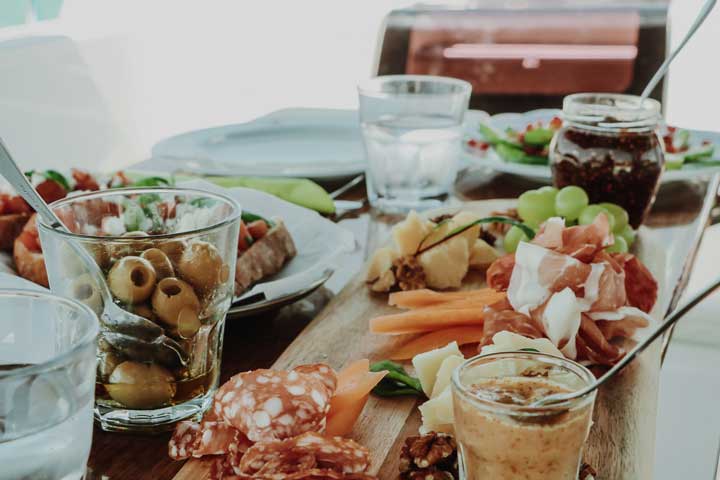 Some yachts and catamarans now come with solar panels…. all come with sails! Whenever Stribog looks favorably on you, persuade your skipper to hoist the sails and harness the power of the wind. Ok, so you may not get to the next stop as quickly, but there is nothing quite as peaceful as turning off the motor and listening to the true sound of the sea.

When you’ve moored up on a buoy, it is great fun to hop on to an SUP. Paddle-board to shore to explore and use muscle power over tender. Although perhaps hone your technique before you attempt it in anything more than swimwear!

Where possible, try to moor on buoys rather than dropping the anchor. Anchors can cause damage to the sea bed. This is especially important in areas with delicate corals or rare and endangered species, such as Pinna nobilis. This giant Mediterranean mussel is struggling to survive, with mass mortality outbreaks occurring over the past few years. There are still populations in the Adriatic and environmentalists raising awareness, such as the guys at Rato’s Grill on Šćedro. 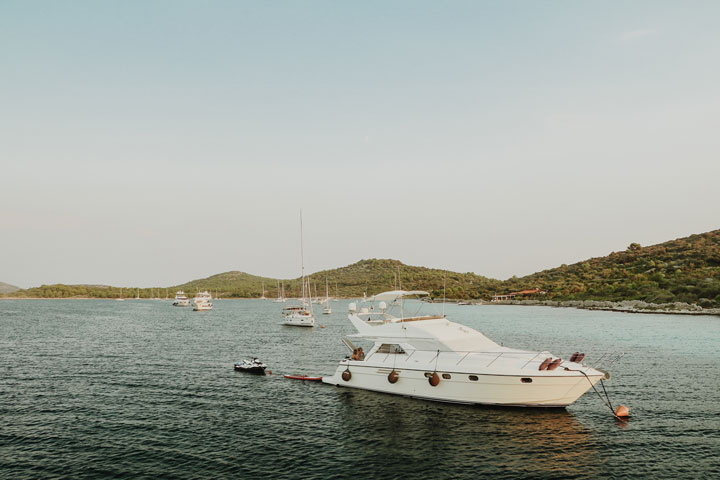 When you are packing to go on holiday, don’t forget your reusable bags. Single-use plastic is really bad for the environment and, at sea, marine life can mistake plastic bags for jellyfish.

The only thing you can flush down the boat toilet is human waste. Whatever goes down the loo, goes into the sea. So, even if it doesn’t cause an expensive blockage on board, you should never flush toilet paper. A strategic visit to the local cafe for a morning coffee break is considered good sailing etiquette! 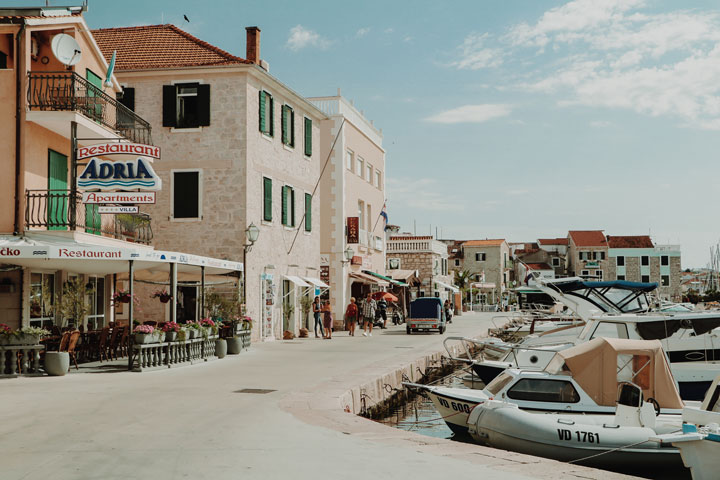 Invasion of the inflatables

Giant birds, especially pink flamingos, golden geese, and white swans, have infiltrated the Croatian coastline. It appears that if you don’t have at least two huge inflatables on your boat you are no one. In Vis this summer, a 2-meter wide peacock was negotiated down the riva by two grown adults and onto a waiting catamaran. Further along the harbor, a flamingo had taken up residence on one of the buoys. What happens to them once the proud owners return to their hometowns? Hopefully, they are being passed along to the next charter crew, rather than ending up in landfill (or worse, dis-guarded on the shore).

In the towns, such as Split and Trogir, the nighttime fad is a sort of lit-up ‘bubble on a stick’ made of plastic and held aloft while walking around. After a night or two, they will all end up in the bin. You could choose to spend your money on something more rewarding like a  tasty meal! 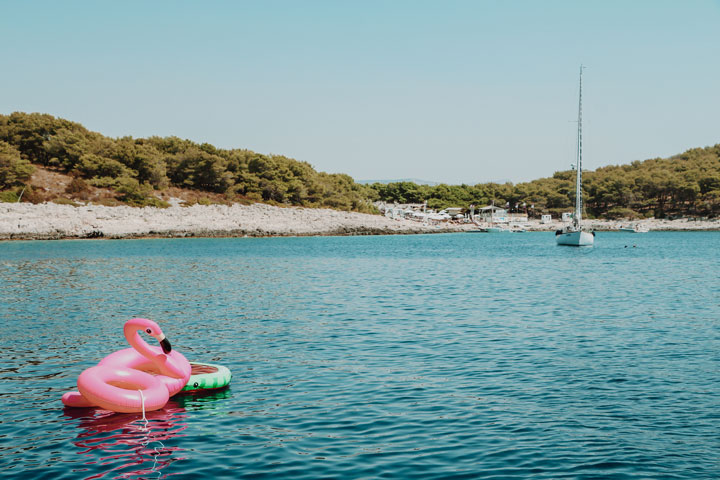 You should also read these: